Any discussion of fishing in the Northern Gulf of Mexico has to start with Lutjanus Campechanus, the American Red Snapper. The Red Snapper is one of the most abundant and aggressive fish in the gulf known for its fierce nature, striking red color, and delicious meat.

It inhabits deep bays, in-shore and near-shore reefs traditionally found in depths up to 300 ft but occasionally found all the way down to 500ft.

Red Snapper are most abundant in the Northern Gulf of Mexico and found off the coasts of Florida, Alabama, Mississippi and Louisiana. Red Snapper like eating cut cigar minnows and squid and assorted live baits like pinfish can be deadly effective and sometimes necessary to catch big sows especially toward the end of the season. 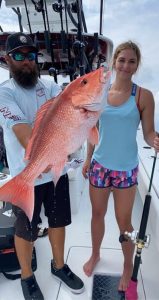 These notorious bait stealers like to live in and around structures and can be very difficult to catch. They are wary of lures, cut, and even live bait and an exposed hook will send them scurrying back to safety.

In our area, sizeable adults live in the upper water column around oil rigs off Alabama, Mississippi, and Louisiana and are delicious when caught. 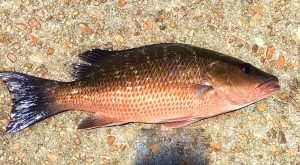 These smaller, colorful snapper are closely related to the yellowtail snapper in South Florida.  Found in large schools over natural bottom.  They are excellent table fare and are readily caught on squid cut bait. 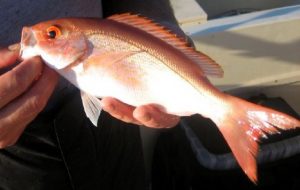 Along with Vermillion snapper these are abundant on natural bottom with large individual often found out to 600 foot depths.  They are excellent table fare and are often found fried whole in South Florida restaurants. 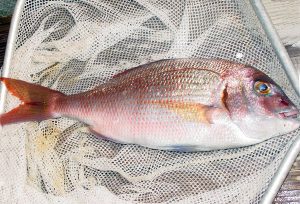 Greater Amberjack are the largest of the jack’s in the Northern Gulf. They commonly weigh up to 40 lbs with individuals over 80 lbs not uncommon. They are abundant on wrecks, oil rigs, and natural bottom anywhere from 80 to 500 ft. Large live baits work well. They are fierce fighters and have brought many an angler to his/her knee’s. 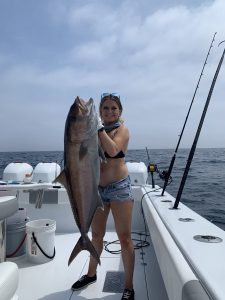 This close relative of the amberjack is often found on oil rigs between 400-600ft. Known for its excellent table fare, the Almaco is a uncommon catch.

These drab, odd shaped fish named for its trigger action dorsal fin are found mixed with Red Snapper in the same type of habitat.

In the 50s and 60s, Triggers were considered trash fish and discarded as such.

Although a challenge to clean, Triggerfish are now widely to be considered amongst the tastiest fare in the gulf.

Unfortunately, they became so sought after by commercial fisherman that their numbers dwindled and now triggers are subject to tight bag limits and short seasons. 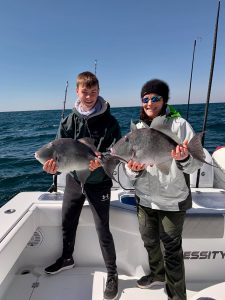 This near-endangered grouper species is the largest in the Northern Gulf.

Warsaw groupers are classified as deep-water groupers, since they inhabit reefs on the continental shelf break in waters 180 to 1700 ft deep; juveniles are occasionally seen on jetties and shallow-water reefs.

They are the only grouper with 10 dorsal spines. They are dark reddish-brown or brownish-grey to almost black in color dorsally, and dull reddish-grey ventrally. They can very well exceed 8 ft in length.

This grouper is common throughout the West Florida shelf and is occasionally caught off Alabama coast.

This bottom dweller likes to hide in crevices and holes where it can ambush prey from a safe and strategic location. It is of considerable commercial importance. 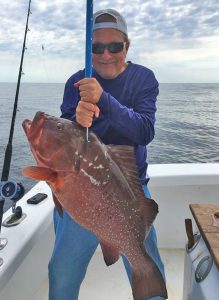 This midsize grouper is found in shallow waters throughout the gulf. It is most plentiful on the West Florida Shelf.

Bigger individuals over 20-30+ pounds are very difficult to catch because they are very strong and often hooked in thick structure. The gag grouper makes great table fare.

Known for its delicious flavor, yellow lips, and broom shaped tail, the scamp is a favorite amongst anglers and can be caught throughout the gulf on natural bottom.

Scamp can get up to 20lbs but fish between 5-15lbs are more common. Scamp often are finicky eaters with a subtle strike. Small live pinfish and cigar minnows are the baits of choice. 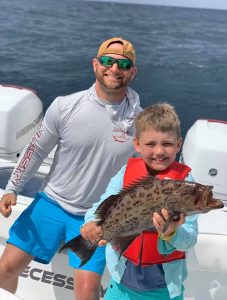 Speckled hind derives their name from the multitude of tiny white spots that cover their reddish-brown head, body, and fins. Juvenile specimens tend to have a yellow body color with white spots.

Speckled hinds are deep-water groupers: adults inhabit offshore rocky bottoms in depths of 400 – 1300 feet. They are delicious though infrequently caught.

*at one time, The Necessity held the Alabama state record. 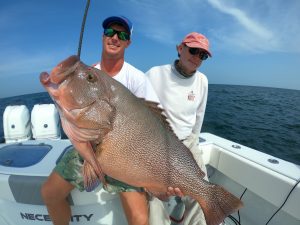 The black grouper is very tasty and an incredible catch. 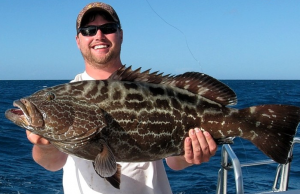