One of the most popular sport and food fish on the Gulf Coast, Cobia ‘runs’ during April has produced legendary fishing for decades.

Cobia migrates East to West (as do Tarpon) beginning in late March and tournaments are common from Destin to Orange Beach. Unfortunately, overfishing and competition have made catching larger specimens increasingly difficult. Many believe that Cobia needs protection in terms of smaller bag limits and larger minimum size requirements.

*The Necessity still holds the State Record Cobia caught by Captain Ben Fairey in 1995 weighing in at 117+lbs! 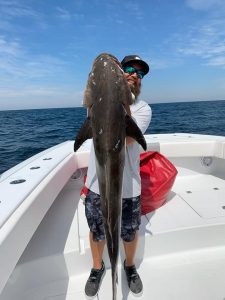 Tarpon run the gulf coast in the spring and early summer.  They are more commonly caught in the clearer waters found East of Pensacola however, they are able to survive in brackish water, waters of varying pH, and habitats with low dissolved O2 content due to their swim bladders, which they use primarily to breathe.

They are also able to rise to the surface and take gulps of air, which gives them a short burst of energy. Known for their acrobatics and blistering runs, tarpon are among the most sought after sportfish in the world even though they have no food value.

Tarpon use the Gulf Coast on a East to West trajectory in late spring and early summer with large number schools.

This hard-striking fun-fighting fish is well known for its reel screaming runs and line tangling antics as it gets near the boat. Important recreationally as well as commercially, the King Mackerel is caught throughout the gulf.

These fish are caught most frequently near shore in water from 50 to 150ft and are often found feeding on top and seeing one ‘sky-rocket’ 8-10 ft in the air is always a thing to behold! 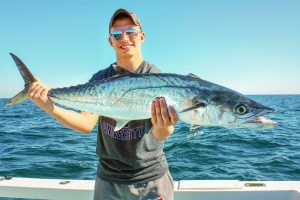 A smaller cousin of the King Mackerel, Spanish are often caught trolling near shore waters where they school to feed voraciously on baitfish.