The highly colorful fish are voracious predators that live up in the water column and tend to congregate around weed lines, rips, rigs, and other floating structure throughout the gulf.

Known to attack anything shiny, even a bare hook, smaller individuals tend to be caught quite easily. Once hooked, the angler can leave the fish in the water and others in the school will circle close by. Larger males called bull dolphins are more selective and solitary. 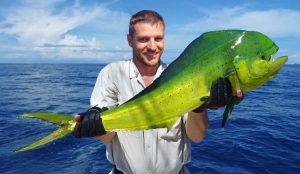 This relative of the billfish is considered an offshore pelagic and found in the same habitat as Marlin and Tuna.

Like kings, Wahoo is known for their fearsome bite and furious runs.

One of the fasted predators in the Gulf, the Wahoo is perfectly engineered to catch and destroy its prey. These fish are a brilliant cobalt blue and purple with striking stripes 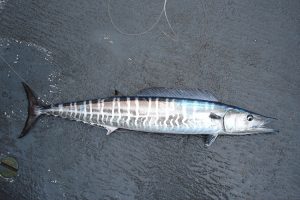 The smallest of the Tuna family, large schools are common around oil rigs in the Northern Gulf where they are commonly caught at night jigging.

Blackfin range from 5-15lbs and are an underrated food fish though notably bloodier than their larger cousins.

This is one of the most sought after fish in the Gulf of Mexico known for its hard fighting and excellent taste.

Yellowfin Tuna are beautiful fish with striking yellow fins with a royal blue and gold body. They are migratory in some cases but also congregate year-round near oil rigs where they are targeted by a recreational and commercial fisherman.

Yellowfin are some of the most exciting fish to go after and oftentimes will ‘bust’ throughout the day but especially at dusk and dawn where they can be caught by a variety of methods.

A tuna that is rare in the Northern Gulf but occasionally caught at night around rigs and are often mistaken for a large blackfin or a midsize yellowfin.

These tuna are delicious to eat and though they don’t have the reputation of yellowfin, they hold their own in terms of taste.

The most prized commercial fish and largest of all the tunas, the Bluefin is truly the king of tuna fish.

Rare in the Northern Gulf, these migratory fish do show up every year in late February through April to spawn and can be caught at that time usually in waters off Louisiana.

These monsters can go 700lbs and are very challenging to catch requiring long fights and heavy tackle.

There is a Gulf wide quota for bluefins which must be reported when caught.  No more than a handful of these amazing fish are allowed to be harvested any given year. 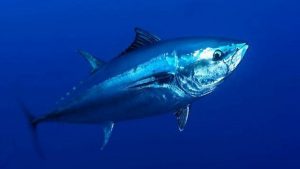 The king of all game fish found in the Northern Gulf, this apex predator is known for its striking characteristics like its brilliant cobalt blue colors, elongated bill, pronounced dorsal fin, large sickle-shaped tail, and large size.

Adult females can weigh up to and beyond 1000lbs. Often the centerpiece of annual sport fishing tournaments, Blue Marlin are known for their fierce fight, post hook-up acrobatics, and shear strength. 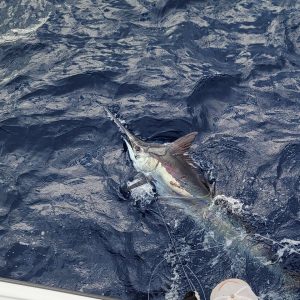 The much smaller cousin of the Blue marlin, White Marlin rarely get over 100lbs, have smaller bills, and more ruddy features.

However, they still put on a great show and usually jump quite a bit after getting hooked. These fish can be caught year round but are most prevalent in the fall months. 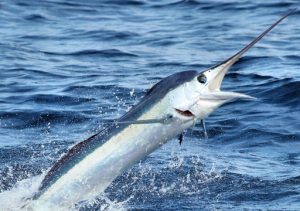 Famous for its squat body and huge bill, this prehistoric looking billfish had made a huge comeback in the Northern Gulf after decades of overfishing and can be caught during the day or at night.

Swordfish typically spend their time very deep in the water column during daylight hours although they do ascend at night to feed primarily on squid but also other large baitfish.

Somewhat smaller than White Marlin, these fish rarely crack 100 bs (Alabama state record is just 81lbs) and are the fastest predator in the seas, these fish are known for spectacular acrobatics especially when hooked on light tackle. 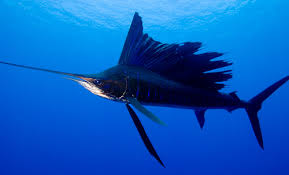